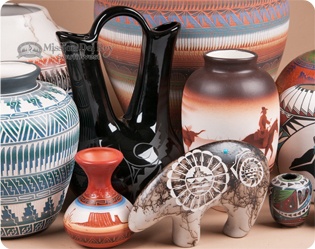 Native American pottery such as the well known southwest Indian pottery of New Mexico can be fine works of Indian art or primitive and utilitarian in design. Tarahumara pottery is made of rough earthen clay in white, orange and brown. Rather than being polished and smooth Indian pottery, Tarahumara Indian pottery is rustic and still made as it has been for generations. We have come upon antique Indian pottery pieces, pitchers, bowls and clay pots.