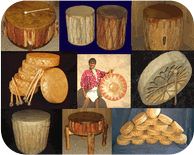 Buy Native American drums for sale online to get the best in authentic Native rawhide drums, made by American Indians. Pow wow drums and hand drums have spanned the generations of the southwest. Native American style drums, made by the Tarahumara Indians are fashioned by hand using indigenous natural materials. Yellow pine and red cedar drum hoops and frames with stretched goat skin rawhide and heavy cowhide are perfect for drumming circles and pow wows.

High quality horse hide, elk, deer and buffalo hide drums have set a new standard of excellence in hoop drums and have become the hand drum of choice for many drummers.

*Wonderful! 9 days from Texas to Belgium Europe! Beautiful service & drum! Thanks
*Positively thrilled with the drum!! Perfect condition, as described. Soon be Back for another!

The sound of Native American drums, echoing through mountains and canyons, and even across open fields and meadows, accompanied by ceremonial chanting and prayers, is something that memories are made of. Once someone has heard these evocative tunes, it’s hard to ever get them off one’s mind. And what make those lasting impressions possible, is the unique hand-made drums that Native American Indians use in their traditional ceremonies. Music ethnologists and cultural historians all agree that drums are one of the most primitive musical instruments used for a multitude of purposes. And Native American Indians were amongst the earliest civilizations to learn and quickly adapt the art of drum-making to their unique cultural needs. Here at Mission Del Rey, we are proud to be custodians of those rich traditions, and are happy to be able to share them with our customers.

Native American drums available at Mission Del Rey represent highly authentic pieces of craftsmanship, entirely handmade, and steeped in historical significance. Drums have been used by Native Indians throughout the southwest and beyond for ages. From rallying calls to do battle, to sending off braves to their final resting place, to the use in many a native cultural and religious ceremony; drums have held a place of significance for these ancient cultures.

Even today, Hoop Drums, Pow Wows, Tom-Toms (not “technically” a native word), Long Drums and other forms of this highly versatile instrument, are commonly used to commemorate significant days, like Holy week and Feast days. Some native Indian traditions hold that the beating of drums, in concert with the recitation of sacred ancient scripture, have the power to dramatically altar natural phenomena – like winds, rains, sea currents and other weather patterns.

Here at Mission Del Rey, we have assembled a large variety of drums that have special significance for Native American Indian cultures. Many of these instruments are believed to have the power to intercede between the spirit world and the human/animal worlds. Each beat of the drum is comparable to a beating heart, communicating messages between worlds, and holding the power to heal sickness and intercede between man and nature. Is it any wonder then that the drums made by skilful crafts people, using ancient traditions and knowhow, are believed to mimic natures’ heartbeats?And it is precisely this heartbeat that you can own through the magnificent drum collection we have here for you at Mission Del Rey.

When you buy one of our drums, you are not just buying a musical instrument – you actually own a piece of history. Drums in the Americas have been traced back to 700 AD, with remnants of pottery drums and cylinder drums discovered across Costa Rica, Central Mexico, the Guatemalan highlands and the mountains of Peru.

At Mission Del Rey, you’ll also find some Native American drums that were used by Tarahumara Indian cultures from deep in the Sierra Madre Mountains, for ceremonial occasions. You’ll be able to browse through a wide collection of drums that vary in use, age and degree of preservation. So, rather than just owning a brand new, freshly made instrument “out of the box”, you actually get to own a piece of art that was actually used in Native Indian rituals.

None of the drums you find here, in the Mission Del Rey online catalogue, are mass produced at factories or sole less automated assembly lines. Each one is uniquely made by hand, using drum making traditions that have been passed down from generation to generation.