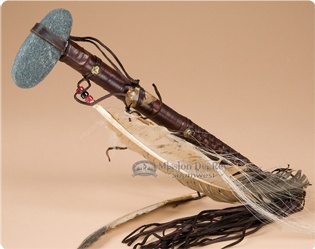 Native American tomahawks were tools, a weapon, a ceremonial item. The American Indian tomahawk served many uses. Originally made of a shaped piece of stone attached to a wooden handle, the tomahawk was a prized possession. The Indian tomahawk could be used for close combat, since it was a one handed weapon. Likewise, it could be thrown to bring an enemy low. It is the weapon that, alongside the bow, most people most closely associate with Native American warriors. The tomahawk could also be used for hunting.

Today, the tradition of the Indian tomahawk is still carried on for peaceful purposes and play a central part in many ceremonies. Tomahawk pipes are especially important here, and the symbolism of peace versus war is obvious. Passing a tomahawk pipe around so that all could partake of the smoke would often cement a peace treaty. In effect, the instrument of war had become one of peace. Native American tomahawks were generally individualized by their owner, and decorations were added to the basic instrument. Embellishments include fathers, bone, and leather, plus medicine wheels or bags. Tomahawks are perfect for southwest decor and rustic western style.