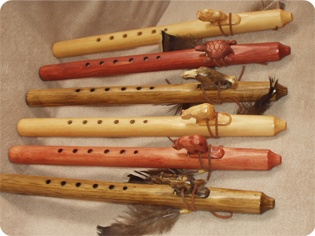 Native American flutes by Jonah Thompson flutes are genuine Navajo Native American flutes with hand carved Indian totem wind blocks. Navajo flutes are the pine and cedar flutes that are so popular in the southwest. Native flutes are perfect for meditation, dance or decoration. These finely crafted pine wooden Indian flutes also have a leather block tie down, beads and feathers as well as a smooth finish in cedar wood or natural, cherry or walnut colored pine.

Native American flutes by Jonah Thompson are authentic hand made Navajo flutes, tuned in the popular keys of A minor, F#, Em and F# drone which makes them easy to play and deliver beautiful tranquil flute music.

*** "I am very pleased with my purchase. the cost was very reasonable and I received my flute in a matter of days...I have enjoyed my new flute tremendously. Thank you." Ron ***

Native American flutes are believed to be one of the oldest musical instruments that the Native peoples invented, following the invention of indigenous drums and rattles. Archaeological evidence has been discovered that dates some of these mystical instruments to more than 60,000 years ago.  And throughout that period, while they have continually evolved to keep pace with contemporary trends and styles, the simple musical flute has remained largely true to its original form.

Here at Mission Del Rey, we offer a large variety of pine flutes made by renowned Navajo musician and flute craftsman Jonah Thompson. Made entirely by hand, the music from these flutes sooth and calms even the most restless of souls.

Different stories abound on how the flute evolved. Some believe that it has its genesis at the hands of a love-stricken Indian brave who “discovered” it by chance, as the wind rustled through a hollow dead tree branch to produce evocative sounds, while he sat in a forest lamenting his hopeless affection for the girl he loved.  Other accounts give credit to the Spanish Conquistadors, who introduced a crude Asian flute to the Five Civilized Tribes, who then perfected the instrument using river cane.

Regardless of its origins, ever since it was invented, Native Indian flutes have undergone little evolution. In the early parts of its life, various materials were used in making these instruments. Natural materials were primarily sourced from whatever was available in and around where the flute makers and players lived, including bones, shells, hardwood and softwood. However, the basic design and shape stayed firm.

Native American flutes also adapted to changing societal needs, lending themselves useful for various reasons. Different Indian tribes used them for entertainment, religious ceremonies, meditation, prayer rituals, and even love and courtship. At one point in its evolution, these humble instruments were not supported by the government across most of the United States. A lesser device would likely have given up and past on into extinction – but not the resilient flute!

In the early 1900’s, the indigenous flute started down a path to resurgence from the Southwest, thanks largely to earlier efforts by Native culture advocates like Dr. Richard W. Payne. The 1960’s saw the flute gain tremendous popularity. From then on, this simple music maker never turned back.

The humble flute has survived many generations, and successive waves of native flute makers have perfected their art of creating these devices for many to enjoy. Today, popular Navajo musicians like Jonah Thompson are doing their part in furthering the evolution of native flutes. The hand crafted instruments available here at Mission Del Rey bear testament to some of the best flutes available anywhere.

Our native flutes are original pieces of art, made by master Navajo flute-maker, musician and story teller Jonah Thompson, who grew up on the Navajo Reservation in Kayenta, Arizona, and picked up his craft watching his uncle make these beautiful musical instruments.

In our catalogue, you’ll find flutes made from Cedar and Pine – natural raw materials that are so abundantly available in the Southwest. Smooth finished in either cedar wood or natural, cherry or walnut colored pine, you’ll find flutes with hand carved fetish wind blocks that also come with a real leather tie downs and genuine turkey feathers.

And now, for a very limited time, we are offering two very special bonuses for you when you buy any of our Native American flutes from our vast online collection. You’ll receive a great informational booklet on Jonah Thompson Flutes, titled "Touching The Wind".

But that’s not all! When you purchase any of these native instruments from our online store, you’ll also receive another FREE gift from us. For a limited time, and while supplies last, we’re offering a native design woven Flute Bag with every purchase, so you can use it to protect and carry your prized flute in.

There is something almost magical about "Native American flutes". Music played on a Native flute has such a spell binding and calming affect on one's spirit. If you are familiar with flute music you must appreciate it too. One of the great things about Native American flutes is that anyone can play them because they are so basic. Unlike some Native instruments that require great skill and determination, the flute is simple. It can be enjoyed by young and old alike. A Native American flute can be made of expensive woods or something as common as a piece of cane or bamboo. The flutes we are offering are made from pine, a relatively inexpensive wood, but with great attention to quality and detail. These are authentic, tuned Indian flutes made by a Navajo craftsman and musician named Jonah Thompson and bare his initials.